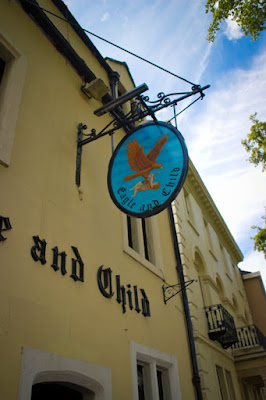 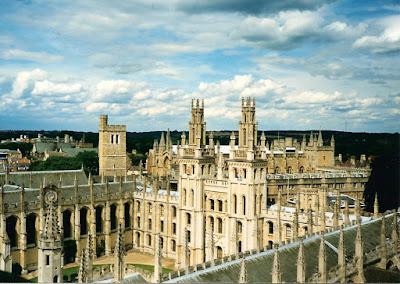 Time and place are the two aspects of setting in a work of fiction. In this post, I will discuss the importance of “place” in my Oxford Chronicles series. The place of a story can serve as a plot catalyst, but it can also serve as creative inspiration. In fact, the idea for the series came from my first publisher after he looked at photos I had taken of Oxford and the Eagle and Child pub. “What do you think about setting a novel around that pub and the writers (the Inklings) who met there?” he asked, and from that seed of inspiration grew my first book Inklings.

As I’ve traveled to different locales, various impressions and observations find their way into my storylines. Cambo House outside St. Andrew’s, Scotland, led to the pre-WWII love story in Evasions of Eric and Laurene. Having spent the night myself in the “dowager” wing of the mansion, sleeping uneasily in a Victorian tester bed in a capacious room with heavy curtains and mahogany wardrobes, I could easily describe
those details when Laurene is quarantined with the flu to her grandmother’s room. Walking St. Andrew’s
famous golf course with my friends enabled me to understand Eric’s love for
the game and the fun he has finding lost golf balls in the gorse. And our adventurous
drive up into the highlands to stay in a lighthouse near Gairloch led me to incorporate
that starkly beautiful landscape into the frame story of the MacKenzie clan.
Thanks to the generosity of the C.S. Lewis Foundation, I was able to spend a
night in Lewis’s home the Kilns; in fact, I slept in his bedroom. Well to be honest,
I was so excited I could barely sleep! However, that night allowed me to “experience”
a little of what living at the Kilns could have felt like for Annie Little when she finds
refuge there as a wartime evacuee.

Expectations opens in Oxford, but quickly moves to Paris. Since I had lived there for a semester,
I could easily place David and Kate in my Passy apartment with a skyline view of the Eiffel Tower.
I had attended a bilingual school with some illustrious classmates, including the granddaughter of
Winston Churchill and daughter of the British ambassador, who kindly invited all the girls in our class
to her birthday dinner party at the British embassy. I was dazzled by the embassy with its ornate ballroom
and Queen Victoria’s throne, which the queen never sat on but we schoolgirls did. My memories, as well as
my diary entries from that important time in my life, gave me rich sensory details for the story I was to
write decades later.

These kinds of details belonging to “place” can bring verisimilitude to one’s writings as well as trigger
numerous plot points. Discovering the right setting, both in time and place, could be the key
to unlocking a successful story.

Posted by Melanie M. Jeschke at 6:20 PM No comments: